Keeping up with the Harts - David Hart Galleries Skip to content

Keeping up with the Harts

Iconic Australian artist David Hart is going from the Sunshine Coast to the United States, having just landed an exclusive contract for his art to feature in an American reality series. Yet, given the artistic Hart pedigree, the family could well be scouted for their own show as the third generation follows in their grandfather and father’s paint-splattered footsteps.

Already well practiced in the art of autographs – the glossy walls of the Mooloolaba Hart gallery are adorned with the trademarked work of four Hart family members, David and children, Jake, 23, Chloe, 21 and Harrison (Harry), 17 – this creative clan is a colourful cast.

I’m catching up with David Hart and his glamorous wife Christine following their recent three-month art tour of the US, from the favoured bright colours in New Orleans galleries to the teal and white approach of Miami artists, poised with plans to further establish David’s art presence overseas.

“We managed to get David into a large gallery in Fort Lauderdale, Miami as well as his work featured exclusively in a reality TV show in Miami,” reveals Christine.

The reality show, The Jones’, follows a long-term couple on their way to the altar, and eight large pieces of David’s work will feature predominately on the walls of their home during filming in Miami. 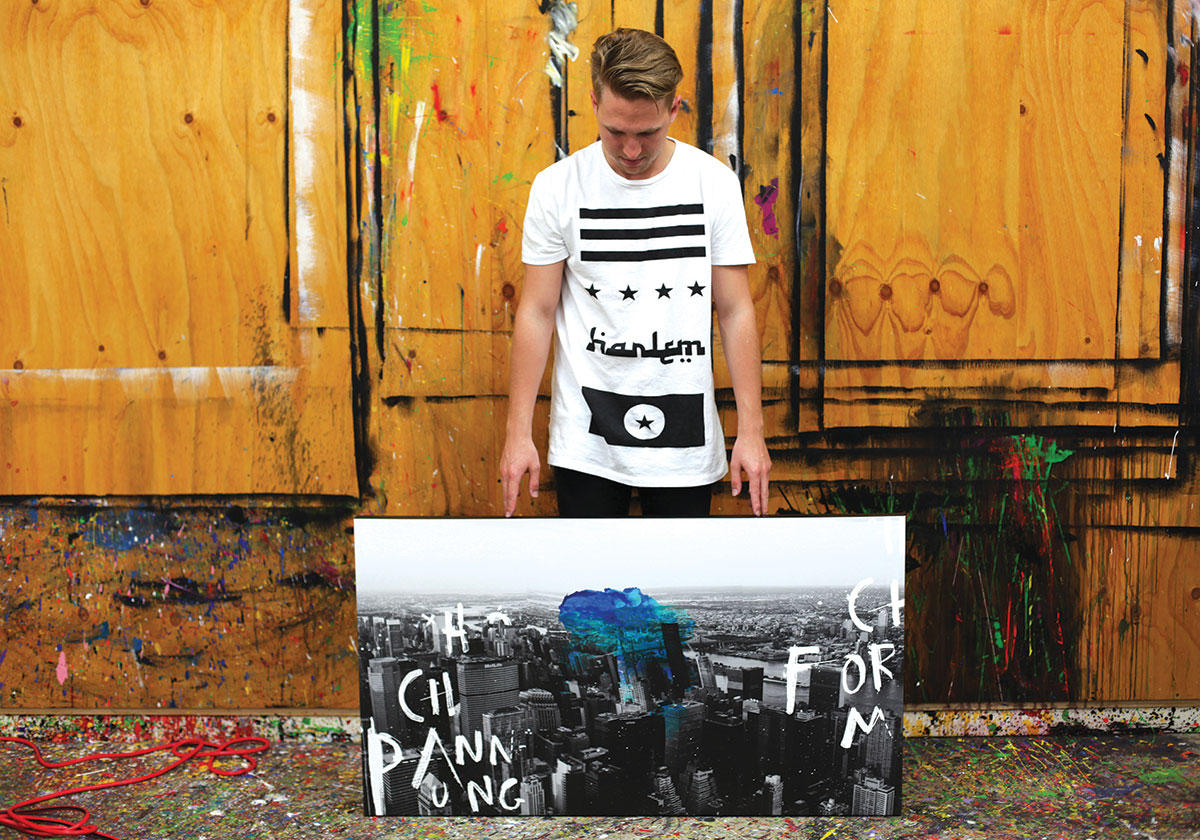 The Harts have been approved for a three-year VISA, issued under the noteworthy category of ‘famous person’, and are looking to split their future between their current home in Brisbane and America.

David exhibited at the New York Art Expo in April, and will exhibit at the Hamptons in June, with a US agent expressing interest in representing him, while the Australian Government Department of International Affairs is staying in contact with the couple after the success of their recent US trip.

“What we’ve done from the start, since we got married, is come up with new concepts and carry them through. That’s what we feel like we’ve done here, taking things to the next level, it’s another chapter in our story,” says Christine.

“I was chatting to a local artist here on the Coast this morning. I was saying, be prepared to reinvent yourself, change things up and keep learning is really the key,” says David of the evolution of his work.

Then there’s David, Pro’s protege, whose accolades include his sought-after, vibrant depictions and conceptual works including being commissioned by Telstra to ‘live paint’ a masterpiece with gold-medal winning athletes Cathy Freeman and Geoff Huegill for the London Olympic Games.

“What’s great about our family is that, and we never designed it to happen this way, they’ve all become a very big part of what we do, so Jake’s just created David’s new website, then Chloe does all the writing and promotions and Harry does our picture framing,” smiles Christine, sharing that the family also holds a strong Christian faith.

During the US art trip, David wasn’t the only Hart to be inspired abroad – they were joined by Harry and Chloe, who was already in America finishing her creative writing university degree in Michigan. 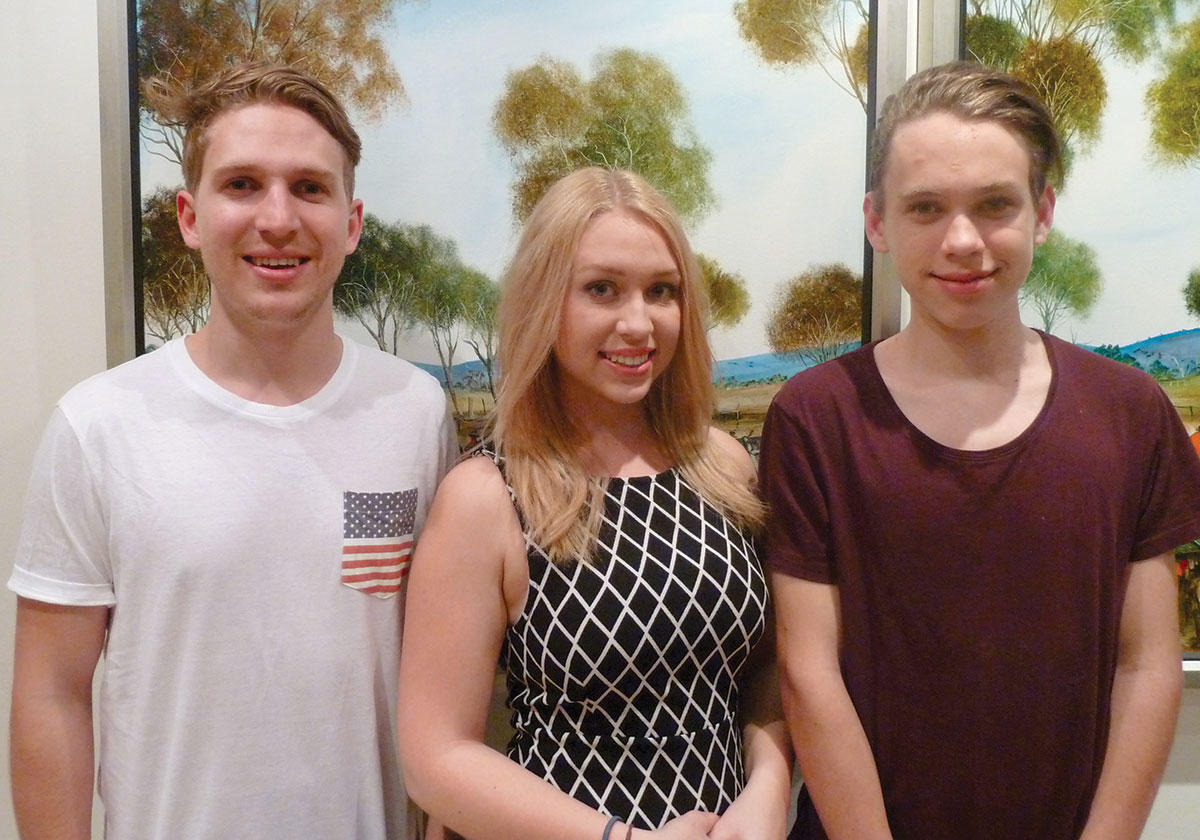 Be prepared to reinvent yourself, change things up and keep learning is really the key.”

Now returning to Australia, David and Christine share that Chloe aims to be a novelist as well as managing a side business of editing and copywriting. Eldest son Jake, 23, is a senior graphic designer at a Brisbane company in addition to selling his art in the Hart gallery.

And, “Harry finished Year 10 last year, at the moment he’s working for us and will start studying a graphic design course starting later this year just like Jake, so they are all very creative,” smiles Christine.

The proud parents describe the various art styles of their talented offspring; there’s Jake’s industrial style, “modern/edgy, he does digital images so he will paint over the top of those so it’s kind of like digital art and paint,” explains David.

Christine says, “Chloe started off painting like David, then she wanted to do her own style so she’s branched out, her last series she did on trees with this amazing background with colours and different techniques.

“And Harry, who’s built his branding painting the dragonflies from the carpet commercial, he’s got some new ideas he wants to work on in the studio now.”

So when it comes to the Hart creativity gene, is it inherited or learnt, or perhaps a bit of both?

“They were very creative, it was so natural, that they would create things out of paper, or cardboard,” says Christine of when the kids were young.

“My dad showed me a few things here and there, I went down a similar line to him and then I branched out into my own thing. We just provided opportunity and then the kids discovered art for themselves – like, here’s the studio, I’m here painting, there’s paint here if you want a spare canvas,” says David.

“I think another one of the key things we did with the kids is, we said you’ve got to get a diploma or degree in something other than art because you might decide down the track art is what you enjoy doing but not as a career.”

Pro Hart passed away in 2006 when Harry was young, however David says that Jake and Chloe shared a close bond with him. Originally from Broken Hill in New South Wales, David and Christine met as teenagers, before moving to Brisbane first, then the Sunshine Coast in 2000.

“We’ve been here in Queensland for 21 years, I follow the Broncos and the Maroons in State of Origin,” laughs David.

Upon moving to the Coast, they successfully opened and ran two galleries in Mooloolaba and Noosa and David became a stalwart among art aficionados and in the industry, such as accompanying Brisbane Lord Mayor Graham Quirk on an international trade delegation through which he secured exhibitions in Asia.

Yet, “People could look at our business and see fame and success and think, those guys don’t really know what it’s like, their business is brilliant, but we’ve had challenges,” says David.

They weathered the GFC storm when the luxury item of art wasn’t a popular commodity, diversified into art-inspired homewares and published books. In late 2015, the Harts closed the Noosa gallery and relocated to Brisbane.

Currently, David is painting a series on the early Colonial history of Australia, as well as writing a complementary book. Both David and Pro’s work has had significant cultural influences, and it’s this interest in the history of our nation that reflects the work of his father Pro, and something that David says he will continue to honour.

“We don’t have plans to move to America permanently … we have a very strong family history here in Australia and some great branding we would never want to walk away from,” David adds.

“Jake gets married in November to a girl from Melbourne who’s training to be a teacher in art of all things, so it (the family art lineage) will continue,” smiles Christine.